Friends in Philanthropy
Our Articles
News Roundups
Get the Newsletter

The Donor’s Guide to Charity Ratings, Part 2: How to Use Sites Like Charity Navigator to Make Decisions 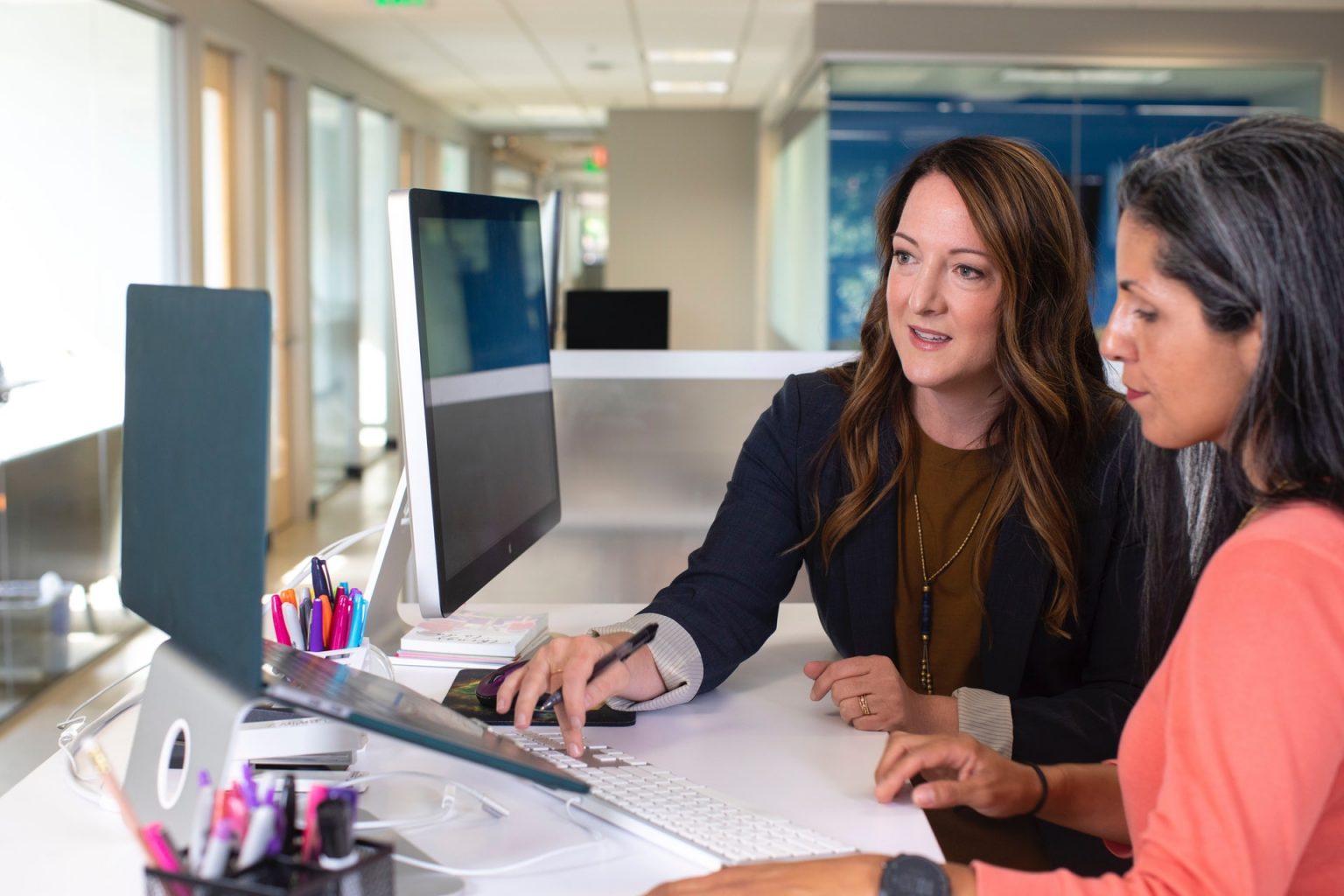 This is Part 2 of our charity ratings guide. Click here to read Part 1: Why Charity Ratings Matter for Donors.

In Part 1, we covered some important context about charity ratings sites, including where they get their information and what factors they consider when assigning scores.

Now let’s answer some questions you might have about actually using charity ratings as a donor: where specifically to check for them, what the scores really mean, and how to incorporate them into your decision making process.

The short answer is: it depends on what you’re trying to accomplish. Here are a few of the most popular sites.

The simplest way to tell if a charity is legitimate

BBB WGA doesn’t attempt to rank or score charities. Its system is essentially “pass/fail.” If a charity meets all 20 criteria, it gets an “Accredited Charity” title on its profile page. It can then also purchase the right to share a BBB badge icon on its website.

If you’re considering an especially large donation, you may want to use an organization’s BBB WGA rating as a starting point, not a final verdict. Other ratings sites can help you build a more complete picture of whether a nonprofit delivers on its mission effectively.

Still, confirming a charity is BBB-accredited is a quick way to verify it’s a legitimate organization that follows important good governance practices.

A giant database with a trusted 4-star rating system

Perhaps the largest and most popular charity ratings site is Charity Navigator. It was launched in 2001 by Pat and Marian Dugan, two budding philanthropists who were frustrated by how difficult it was to find reliable information about nonprofits.

Despite limiting its scope to relatively large and established charities, the site’s database still assigns more than 9,000 charities a rating according to it’s famous 4-star system. This system assigns a score based on 24 indicators, including measures of transparency, fundraising efficiency, and financial capacity.

It rates an additional 200,000 charities using the points-based Encompass Rating System, which debuted in 2020. This “work in progress” approach attempts to factor in impact, community connection, and other considerations that are harder to quantify than traditional nonprofit measures.

We’ll explore Charity Navigator’s star rating system in more detail in a minute. For the moment, just know that this site is the likeliest place to find an analysis of whatever charity you’re looking to learn about.

GuideStar by Candid
Here you can review information on almost 2 million tax-exempt organizations, including raw financial numbers and sometimes even internal plans and mission documents. Aside from awarding “Transparency Seals,” GuideStar doesn’t actually produce charity ratings. But it’s a useful place to find tools and data if you want to conduct your own analysis.

GreatNonprofits
This site lets you read Yelp-style reviews of charities from donors, volunteers, clients, and others who have worked with the organization directly. These reviews provide a qualitative picture to complement the thoroughly quantitative ratings of most watchdog sites.

Religious organizations
Some donors consider it important for an organization they support to align with their religious beliefs. Charity Navigator includes “Religious Activities” as one of its nonprofit classifications. But there are also councils that establish specific standards around a charity’s commitment to faith.

Kinship United, for example, belongs to groups such as the Evangelical Council for Financial Accountability and the Christian Alliance for Orphans. Both require member organizations to hold convictions consistent with the group’s statement of faith.

If a charity’s religious adherence is important to you, consider searching for a similar alliance that represents your beliefs.

Send me Friends in Philanthropy

One monthly email. Five great stories from around the web. Get the free newsletter for serious givers of faith and stay in the conversation.

What do Charity Navigator ratings mean?

In Part 1, we saw what factors influence charity ratings generally. But because Charity Navigator is so popular, let’s take a moment to break down their rating system more specifically so you can get a sense of what a 4-star rating actually represents.

First off, to obtain a star rating at all, a nonprofit must:

Charities don’t apply to be on the site though. Charity Navigator automatically obtains most of the information it needs from the IRS, and it determines its ratings without any action from the nonprofit.

The star rating comes down to a total of 24 factors in two broad categories: 17 indicators of “Accountability and Transparency,” and 7 calculations of “Financial Health.”

Each category results in a subscore of 0-100. To get a final score, Charity Navigator uses the formula below.

In essence, the formula measures how close to perfect a charity scored in each category. This again produces a score of 0-100, which forms the basis for the star rating system. 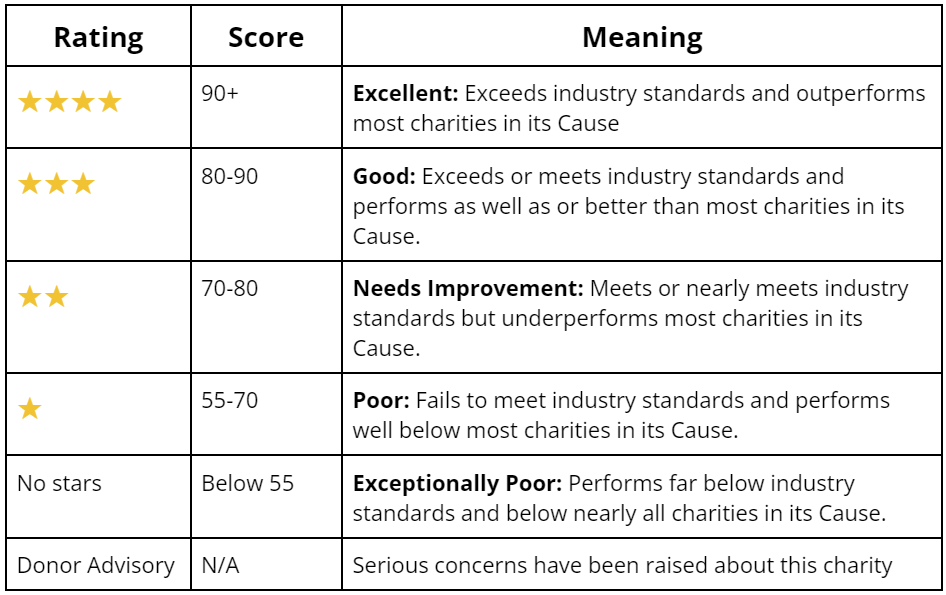 How common is a 4-star rating from Charity Navigator?

As these stats show, the 4-star rating is genuinely difficult to obtain. Only about 40% of charities evaluated currently hold one. And in Charity Navigator’s 20-year history, only two charities in the entire country have maintained a 4-star rating every single year. 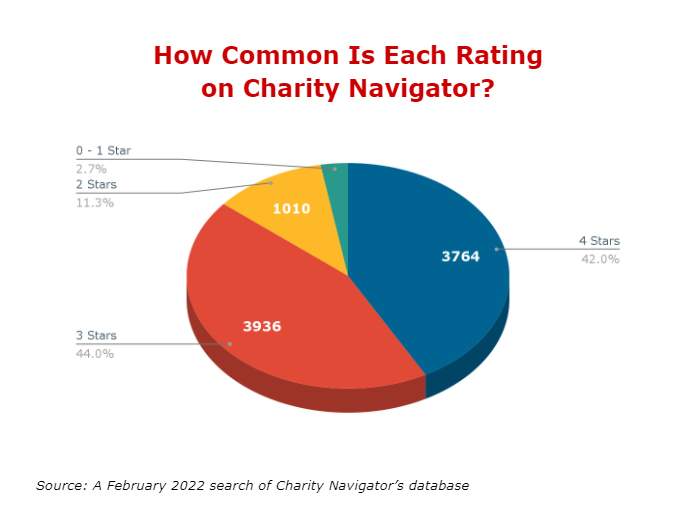 The key point for donors is that a 4-star rating from Charity Navigator isn’t some rubber stamp that any halfway serious organization can achieve. It’s a meaningful sign that a charity deserves your trust.

How can you use charity ratings as a donor?

There are two primary ways charity rating sites are useful to donors:

Here’s what to do in each scenario.

If you’re interested in a specific charity
Look for badges from ratings organizations on the charity’s site. Often these appear in the “footer” at the bottom of the page.

Alternatively, you can search the ratings site of your choosing (such as Charity Navigator) to see if the organization is listed there.

Note that just because an organization isn’t rated on a specific site, that doesn’t necessarily mean it’s not legitimate or well-run. Every ratings site has limits on how many nonprofits they can accurately assess.

If you want to discover new charities
Charity Navigator’s search bar doesn’t just return results for specific charities. You can also enter keywords like “cancer” or “refugees” and view nonprofits related to those terms. You can even filter results by star rating, category, size, and more.

When should you check charity ratings?

Before you give to a charity for the first time, you should at least glance at its ratings. If you’re pressed for time, you could just take a peek at the charity’s BBB WGA accreditation and its Charity Navigator star rating. Those two sources should help you catch any serious red flags about how the nonprofit is run.

After that initial search, you can relax for a bit, because those ratings don’t update very frequently. BBB WGA accreditation is valid for two years. Meanwhile, Charity Navigator updates its ratings once a year. This usually takes place a few months after the charity files its IRS Form 990.

The bottom line is, there’s probably no need to research a charity’s rating more than once a year or so. But if you haven’t done so in several years, it might be time to check up again.

Pro tip: Is there a time of year (such as Christmas) when you always give money to charity? Make it a habit to check the organization’s rating then too, so you’ll remember the last time you looked.

Keep up with the philanthropy conversation

One monthly email. Five stories from around the web. Get the Friends in Philanthropy newsletter sent straight to your inbox.

Want a newsletter preview? Check out the Friends in Philanthropy archive:

Kinship United is a 501(c)(3) charitable organization recognized by the Internal Revenue Service. Contributions are tax-deductible to the fullest extent of the law.