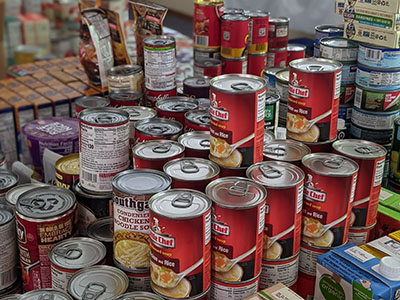 “Are you sure Abraham? You sure you don’t want a Playstation?”

– Miriam Olagbegi, mother of a 13-year-old boy who used his
Make-a-Wish request to feed the homeless

Abraham Olagbegi deserved to spoil himself. The 13-year-old boy from Mississippi had spent the past year battling a rare blood disorder so serious it required a bone marrow transplant.

But when Make-a-Wish came calling, Abraham surprised everyone with his request: he wanted to fight hunger in his community by organizing a monthly free meal for the homeless.

But despite forgoing a tropical vacation or a chance to meet a celebrity, the Olagbegis don’t see their unusual wish as a sacrifice. They even plan to turn the idea into a permanent nonprofit, already dubbed “Abraham’s Table.” “It’s just so rewarding,” says his mother, Miriam.

As we head into the Christmas season, this month’s issue reaffirms a central tenet of philanthropy: that giving is its own reward.

Why a Teen Boy Used His “Make-A-Wish” to Feed the Homeless (CBS News) – Abraham Olagbegi could have asked for a Playstation. Instead he set up Abraham’s Table—and he’s just getting started.

What You Need to Know About Making Charitable Gifts in 2021 (Bloomberg Tax) – From donating appreciated assets to bundling your gifts, these tips will help you get the maximum tax benefit you deserve this year.

Who Wins When Cryptocurrency Donations Soar? (ABC News) – Bitcoin gifts are skyrocketing in 2021. But nonprofits are flummoxed by the extreme volatility of the crypto market, where a donation can lose half its value in a flash.

The Malaria Vaccine Is a Big Deal but Not a Silver Bullet (Wired) – After 30 years in the works, it’s finally here: a malaria vaccine. But there are still serious obstacles to driving down a yearly death toll of 400,000.

VIDEO: Can Science Explain What Drove These Carnegie Heroes? (60 Minutes) – Running toward a burning car. Donating a kidney to a stranger. Could these heroes’ selfless acts be linked to a highly active empathy center in the brain?